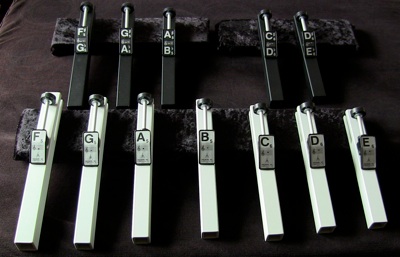 There are special challenges to ringing chimes in solos. They are harder to pick up quickly than bells and require modification of multiple bell techniques.

A soloist may want to make chime pads to angle chimes off the table. This provides a space underneath for your hand, allowing you to pick up the chimes quickly. I made my chime pads from 1” thick foam cut into 4” widths, then into lengths of 12” (2 pads) and 24” (1 pad). The variety of lengths provides options for placing chimes on the bell table in different configurations. For example, you could place them all in a long row if using only natural notes. (Shorter lengths are also easier to carry.) I sewed simple covers from leftover black fabric to match my table dressing. They fully cover the pads, like upholstered cushions. If you use a larger range of chimes, you might make longer pads, or several more short pads.

You can also set the chimes further apart, and use a single pad for both white and black notes. The tine end of the black notes would rest on the table, and the handhold end on the pad.

Sue Garton uses something similar, but her “chime lifter” looks more like a fat cord (in fact, you could use very thick cord, verging on rope). It’s much easier to transport (you could toss it in your bell bag or gadget box), but doesn’t offer as many options as larger pads. Seeing Sue’s version made me realize that my pads may be larger than necessary. You might experiment with different widths and thicknesses of foam, setting chimes on them to ensure the pads are stable, then cover the foam with fabric.

Damping: Chime pads give you several damping options. In this photo, I’ve placed the chimes F5 A5 C6 (imagine them ringing) over the edge of the pad to create an LV chord, freeing my hands to play other notes: 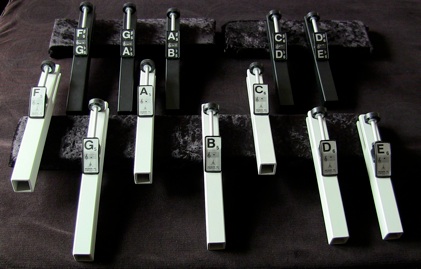 You can vary the cleanness of damping with different chime placements on the pad. In the photo below, F5 through B5 will all decay differently (again, imagine them ringing when set down with more or less of the tine end touching the pad): 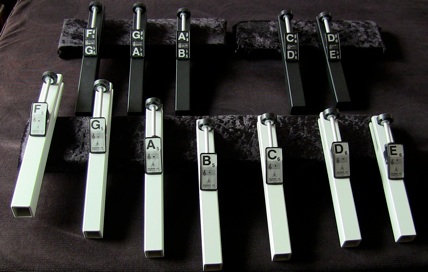 Malleting: You can mallet chimes on the back, and pads will keep them from rolling. Be sure to use a rubber or other soft mallet. Obviously, you would need time to turn chimes over, if ringing them in the same piece, and would need to discern each chime’s pitch from its placement relative to other notes, since the pitch marking is underneath: 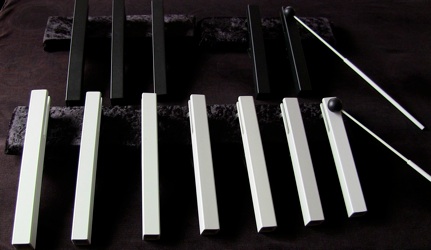 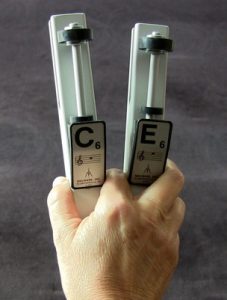 Four in hand: Chimes tend to clank with standard four-in-hand and Shelley techniques. Here are some methods to avoid that. In the photo at left, my finger between the Shelley chimes prevents them from touching. This is the fastest and easiest way to Shelley ring small chimes. In the photo below, the primary chime is turned sideways for “ring and knock.” 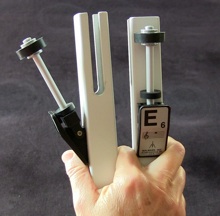 Here’s another way to hold chimes without clanging. Note the placement of my fingers separating metal from metal, especially the pinky in the side view on the right: 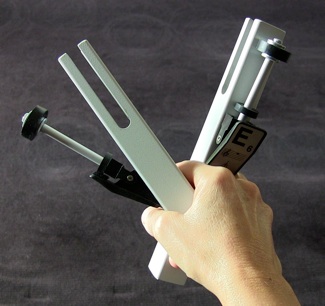 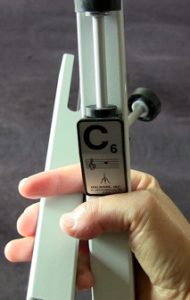 Wrapping chimes: You may find it easier to wrap chimes where they touch, so you can use familiar four-in-hand techniques. My favorite wrap for chimes is medical tape that sticks to itself, but nothing else. Whatever you use, wrap only the handhold end of the chime, not the tine end. Here’s a photo of a wrapped chime: 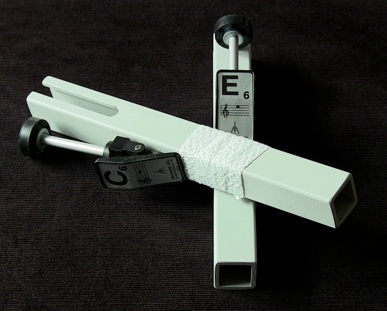 Traveling four-in-hand: In general, I consider a solo piece played on chimes to be one level of difficulty higher than the same piece played on bells, because you have far fewer choreography options at your disposal. For example, displacement is hard if you use chime pads, but rapid pick-up is hard if you don’t. Traveling four-in-hand is difficult, bell trees are impossible, and six-in-hand is nearly so. On the few occasions I’ve used chimes in solo work, I’ve stuck to weaving and use the chimes in only a small part of a piece, for variety. 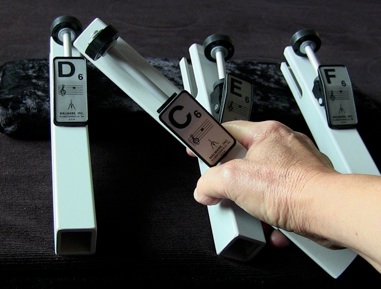 Other tips:
• This angle method can also be used in traveling four-in-hand with bells.
• You can place the chimes further apart, either permanently, or gradually moving them closer together as your skills improve.
• If you set the row of natural chimes all the way to the edge of the table closest to you, you have more room for the handhold end of the chime. It hits empty space instead of foam or the chime next to it.
• I often design my choreography to enable me to pick up a secondary bell with the casting extending over an empty space, e.g. where the E# would go if there were such a thing, instead of over another casting. This may mean starting the phrase on the opposite hand, or finding a place in the music to pass between hands. Sometimes, it means reversing the position of two bells, either temporarily or for the duration of the piece.
• If chimes still collide as you pick them up, work on returning them to the precise spot on the table, and perfectly straight. You can use pins to mark their place. See the article on Landmarks.
• You can four-in-hand with one chime and one bell, if desired.

Storing chimes: This photo isn’t about solo work, but I was reminded of this problem when I opened a case of borrowed chimes and an entire row fell out. The top half of the case has a spring-loaded bar to hold the chimes in place. Omit it at your peril! 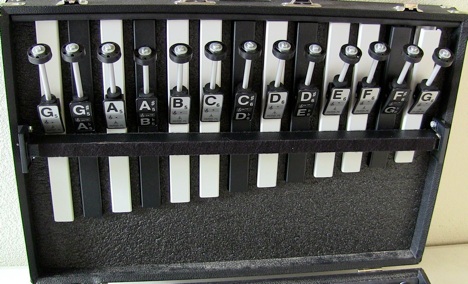 Thanks to chime duo Mr. & Mrs. Michio Wu of Taiwan for the idea behind my chime pads, Sue Garton for showing me her “chime lifter,” Christine Anderson who taught me how to mallet chimes, and St. Stephen’s Episcopal Church (Seattle) for the occasional loan of their chimes for performance, teaching, and these photos.