I try to have something interesting in every piece. Over the course of a concert, the audience acclimates to watching one person ring “all those bells,” so I unveil surprises to keep them engaged.

Here are some of the special effects I’ve used, or seen others use, in solo ringing (asterisk* means technique is explained below; see AGEHR notation guide for others):

These are in addition to musical elements you can incorporate to make pieces interesting, like key changes, tempo changes, and other instruments.

• Backswing – like a tower swing, but instead of ringing at the top of the arc, the clapper engages at the lowest point of the swing. This was written into an arrangement for me of a nautical piece, where it looked and sounded like a bell buoy.
• Flourish – repeated notes on multiple bells, like an arpeggio. This can open or close a piece, or serve as an interlude while the accompanist takes the melody. Here’s an example of a pattern that repeats several times to open a piece: 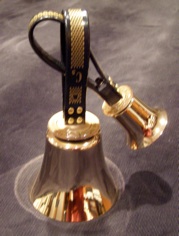 Mini-bell-tree – stand a large bell on end, handle up. After ringing a smaller bell, loop its handle through the handle of the large bell, and leave it there for the rest of the piece. This is useful when you want the smaller bell to continue sounding, or want it to fade out, not damp suddenly. I use the largest bell I have with me that I’m not playing in that piece, if it stands up without tipping over. If it does tip, I’ll take an even larger bell with me especially for this purpose.

• Gesture of inclusion – holding a single bell out (mouth up) toward the audience, make a slow horizontal sweep of the room. I saw Kathie Fink use this in “The Christmas Song” to end the line “Merry Christmas to you,” and I thought it was very effective. This can also be done with two bells in hand, turned sideways so you don’t point a bell at the audience like a gun.
• Zimbelstern – turn your body slowly in a circle while ringing a multiple bell pattern. Time the rotation so you end up facing forward at exactly the right time. For example, turn a quarter turn each time you ring the pattern. Especially useful if you’re performing at a handbell conference, where a significant part of the audience is behind you.
• Flip-out – break apart a four-in-hand configuration and end up with the primary bell in the opposite hand. Practice with two small bells in “ring and knock” configuration in your right (or dominant) hand. I suggest sitting in the middle of a bed, because you’ll drop the bells while learning. Ring the primary bell. As you bring the stroke toward your body, insert your left middle finger in the handle loop of the primary bell. The momentum of the bell makes it swing down (supported on your finger) and flip up, then you can catch it with your left thumb and index finger. Meanwhile, the secondary bell rests between the knuckles of the right index and middle finger. This move works best on a long note.
• Water ballet – move your arms very slowly like you’re drawing them through water. Adds dramatic visual effect to a slow passage.

• It’s easier for a soloist to execute a series of marts by lightly grabbing the handguard, not the handle.
• To mallet across the typical solo range, use Musser M-25 mallets, or learn four-mallet technique (two in each hand, of 3 or 4 different types) so you can change mallets as you move along the range.
• You sometimes see handbell musicians use double circles to keep the bell in motion through its note value. Unless you intend to create a Doppler effect, it’s better to make a slow single circle for the note duration, starting low (if necessary) to give the bell room to move.
• Singing bell is becoming more common, and you generally see it with the bell held mouth up, probably because that’s how singing bowls are played. But handbells have a handle, so why not use it? I hold the bell horizontal, handle in my left hand with the mouth pointing right. This way, I can control the sound better, pressing the bell against the dowel, and vice versa. It also looks less like stirring a pot of paint, and the musical effect is roughly the same.  I use coconut claves (a hardwood) for the best sound.

Some techniques (like echo and singing bell) are hard to hear when done by a solo ringer. Be creative in implementing them, or leave them out. For example, this summer, I rang solos at a church where several of my students ring. I drafted them to stand around the sanctuary and ring a singing bell chord to introduce one of my pieces. It was more effective than doing the technique by myself, and it gave them some low key performing experience. Usually we have to perform without an entourage. See if you can suspend (or quiet) the piano during your special technique, so the audience can hear it.

You can get more ideas from going to concerts (of all kinds) or watching handbell soloists on YouTube. Take time to learn your special techniques well. At the moment, I’m working on a piece where I flip out a bell during a ritard. Though I could just ask my accompanist to follow me, I want to get the timing right so the ritard flows naturally into the next section. I’ve also worked a lot on trills over the years, even though I haven’t used them much. That technique that can be difficult to execute at the proper dynamic with bells in both hands (it’s much easier to do with one hand). Now that I’m playing a piece with multiple trills in my Christmas concerts, all that practice is paying off.

Consider special techniques in the context of the music, particularly the theme of the piece and what’s appropriate to the musical style. If there’s a moment of growing intensity in the music, can it be enhanced by a shake? If you want to add mystery, will a gyro help? Will a table land damp get everyone’s attention at the climax? It’s hard to create a crescendo in solo ringing, because the sound decays. Try using mallet rolls, shake, or trill. Sometimes there’s a beautiful whole note that just cries out for a graceful gesture. Make sure you video yourself before the performance, though. I remember watching a video of myself doing what I thought was a graceful gyro, but it looked more like I was roping a runaway steer.

Some embellishments are already in the music waiting for us to implement, like Baroque ornaments. Take time to learn to interpret these symbols correctly. Do they occur on the beat or before it? How does the symbol affect the note value? Which note gets the emphasis? How cleanly should we damp? These details matter.

Just throwing in a technique for its own sake is like putting a hat on a horse. For example, I recently choreographed a piece and was looking for an opportunity to add mallets to a program. After discussing it with someone much wiser than I am, I was persuaded that mallets would create too dry an effect in a piece that should sound lush. I find it helpful to have independent feedback like that. In the handbell community, we so often see gimmicks, like throwing a bell or dipping it in water, that impress other handbell musicians but mystify a general audience. Sometimes you end up not with a musical effect, but with a wet bell.

Use special techniques strategically. Like decorating a room or putting on makeup and jewelry, a little goes a long way. Including tower swing, echo, marts, and gyros in a single piece comes across as cluttered. Using the same technique multiple times in a concert dilutes its effectiveness. This is a matter of individual judgment. I remember watching an old film of Picasso painting a picture starting from a blank canvas. Every time I thought he was finished, he would add more, and the picture kept getting better. That’s why he was a famous painter, and I’m not. It takes skill and artistic vision to gauge exactly the right amount of decoration. There are also practical considerations. If I haul a second set of bells and a bell tree stand to a concert, I want to use them more than once, and I have to hope the audience enjoys hearing a second piece that incorporates an instrument they may not have heard before. Even in this instance, it’s possible to add variety by doing one stand-alone bell tree piece, and one piece played mostly on the table but partly on bell trees.

Do you have a favorite technique you use in solo ringing? I’d love to hear from you.