While I continue working on the next choreography article, I wanted to share this with you. It’s the bell tree section of the popular ‘Symphonia on Hyfrydol’ by Kevin McChesney, recorded as the postlude Sunday, October 30, 2011 at St. Stephen’s Episcopal Church in Seattle.

During that service, the combined bell choirs of St. Stephen’s and St. Dunstan’s Episcopal Churches (directed by Les Martin and Karin Rogers, respectively) played Louise Frier’s ‘Ostinato Fantasia.’ I have a soft spot for the St. Dunstan’s bell choir, because I had the privilege of teaching several of its members to ring when the group formed in 2009. I’m extremely proud of them! It was the first time the two bell choirs had collaborated in worship, and the first musical offering on handbell trees at St. Stephen’s. Performing ‘Ostinato Fantasia’ had long been a dream of the St. Stephen’s bell choir. We repeated it at St. Dunstan’s on November 13th.

Although I performed ‘Symphonia on Hyfrydol’ in its entirety many times last season (the photo below is from my concert at Christ Episcopal Church in February 2011), I reworked the “stickings” over the summer. This was my first performance using the new mallet pattern. Director of Music Les Martin accompanied me on the piano. Enjoy! 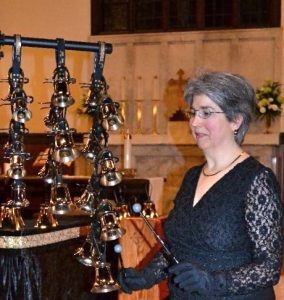