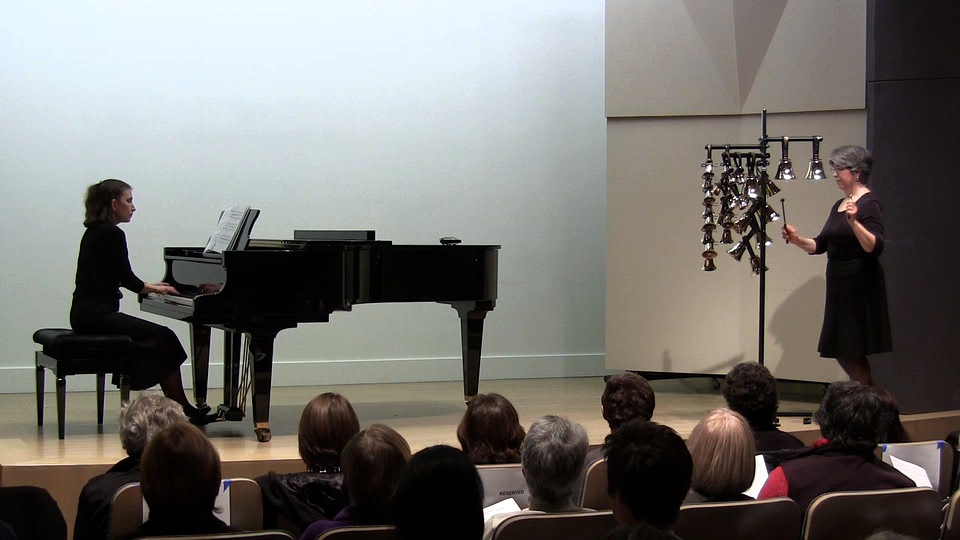 As I continue researching articles on equipment, I’d like to share various tips I’ve learned in recent months of working with bell trees. I’m preparing for a group concert at a museum to celebrate the opening of a Russian art exhibit. Due to space constraints and the need to play a non-seasonal work by a Russian composer (Nutcracker would be frowned on in February), I decided to adapt Nancy Hascall’s arrangement of Orientale for bell trees. (She kindly gave her permission for this adaptation and the small modifications required to accomplish it.) The piece is meant to be played with minimal damping, so it seemed ideal for bell trees. The unusual key (a mixture of sharps and flats) is challenging with my standard setup, but workable. I’ve also been performing bell tree works for other group concerts, as well as developing beginning bell tree works for training new bell tree ringers, and some of my insights below stem from those projects.

Perhaps the most important insight comes from my approach to learning Orientale. I have a tendency to try to learn a piece as quickly as possible. However, once memorized, it’s hard to keep track of dynamic shaping, especially when a section repeats with a variation. On the advice of my percussion coach, I used this approach:

• Establish sections that define the structure of the piece. Assign each a rehearsal mark.
• Learn 2 measures at a time, at a tempo about 1/3 of performance tempo. Perfect the rhythm, dynamics, and technique at this super-slow tempo. (I chose to start with 2 measures from a section that repeats several times, so I could sense progress. That particular section, with its variations, constitutes almost half the piece.)
• When 2 measures are mastered, do the same with the next 2.
• Put those 2 measures together.
• Learn the next 2 measures, and so on.
• When a section is mastered this way, get feedback from a coach and make adjustments.
• Learn the variations of this section, still at a super-slow tempo, paying strict attention to musical interpretation.
• The piece ends with a Hungarian minor scale, which is tricky on my standard bell tree set up. I focused on this scale next, crawling along at this super-slow pace.
• Learn the rest of the piece in the same way.
• Speed up one section at a time.

Throughout this entire process, I always used a metronome, and continued with technique drills, like scales.

I’ve never had a piece come together so fast, or so reliably, as with this approach. I needed to schedule performances of it much sooner than I would have liked, for performing experience before the main event, and it was ready. I’ve already played it for my monthly performance group and at a church concert. I’ll play it again for my performance group and at a church service before the big group concert. I plan to use this approach for my table solos as well, adding the step of playing the piece on piano to identify choreography issues.

More tips: I keep all my sheet music in binders for works in development. I’ve always separated Christmas from non-seasonal works, and keep works I’m polishing for an upcoming performance separate from works being learned for future programs. I’ve added yet another binder of bell tree music to keep on the music stand next to the bell tree stand. In every binder, I keep the music alphabetically by title. Each piece has an index tab, a bell score (enlarged if I can legally do that) with my choreography notes, an accompaniment score, an index card with setup notes, notes from choreography sessions (including approaches that turn into dead ends, so I don’t go down that road again), and notes from coaching sessions on that piece.

When setting up the bell tree stand at a venue, it’s important to put each arm in the right place. The stand is adjusted to be level when loaded (using the leveling feature on the base of the Peery stand), and each arm has O rings spaced for the bell strands it contains. I put a label with my name on one of the stand’s base legs, then numbered each arm on its metal blacking plate. Arm 1 goes on the stand first, over the part of the base with my name label. That helps me orient all the remaining arms. Arm 1 also contains the heaviest bells, and putting it directly over the leg helps stabilize the setup.

The bottom bell of a strand tends to swing too much when struck, even with correct technique. Small bells will sometimes get stuck in the wrong position. I realized I could put the clip all the way through the handle, so the prongs stick out the other side. (This also required turning the clip from its usual position, which would ordinarily be back to front, not side to side.) While this doesn’t completely stop the swinging, it helps considerably. 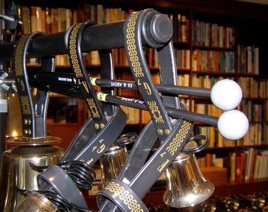 When changing mallets during a piece, there isn’t always a convenient place to put them close to the bell tree stand. Though you can buy racks from percussion vendors that attach to all kinds of equipment, I haven’t found anything suitable for bell tree stands yet. I realized I could use the loops of the bells themselves to store mallets temporarily.

It’s easier to put the mallets in and pull them out if you use a strand to one side, not directly in front of where you’re standing. You’ll still need to practice changing mallets during the piece, and a suitable length of rest during the music to accomplish it.

If you do set your mallets on a table, try to place it so you don’t turn your back to the audience while changing mallets, even between pieces. After watching a video of myself doing this, I concluded it wasn’t my best side.