This article assumes your accompanist already understands accompaniment fundamentals, but may not be familiar with handbells. I’ll write another article for beginning soloists learning to work with an accompanist.

Demonstrate the ringing stroke, especially the point of clapper strike. Stop at that point, so your accompanist can see the extension of your arm, elbow slightly bent, and the height from the table. Also demonstrate the timing effect of different clapper travel lengths in different sized bells, as well as four-in-hand configurations. With a piano accompanist, you’re playing two percussion instruments, so precision is critical.

Handbells are easily overpowered by the piano; usually you’re playing one note and the piano is playing 3 to 8. The dynamic range of solo handbells (in blue) vs. piano (in red) looks something like this: 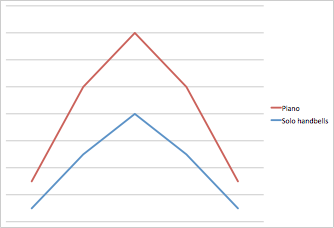 The accompanist will need to play quietly, probably leaving the piano lid down, and may need to use the soft pedal liberally. This is especially true on an older instrument with hardened hammers. There are definite limits to how well even the best accompanist can play on a problem piano.

Balance is a particular issue when you play bells in the bass. They’re inherently softer than the treble bells, which tend to cut through. This dynamic relationship between the registers is the opposite of what your accompanist is used to in the piano, but similar to flute.

Your accompanist should track the solo line in the full score, so explain that handbells sound one octave higher than written. Moreover, other instruments (like violin) and voice tend to grow on a note. Handbells decay instead, absent a specific sustaining technique, like shake or singing bell.

If you’re working from scores for voice or another instrument, the piece may exceed the range of bells available (or playable at tempo). You may have to transpose the piece to another key. Unless your accompanist tells you she feels comfortable transposing on the fly, assume you’ll need to put the piece into composition software like Finale, so you can provide a score in the correct key. If you’re developing pieces together, let the accompanist know you need to avoid unison lines. You can find more helpful tips in Composing for solo handbells and Transcribing for solo handbells elsewhere on this site.

Your accompanist will find it easier to follow you with good visibility to the bell table. Set up with that in mind. After you position your tables, but before dressing them and setting out bells, sit on the piano bench and check the sightlines. Remember to allow for the music rack and music binder, neither of which is transparent. If you use an extras table, put it either behind the solo table or at the opposite end from the piano. We’ve experimented with Janet having her back to the audience, which works well when there’s sufficient space. You could also turn the piano around from its usual orientation, so the lid opens toward you and away from the audience. That makes the piano easier for you to hear, without making it louder for the audience. If the piano must be behind the bell tables, your accompanist can pick up cues by watching your elbows.

Clearly signal your entrances. I generally step forward as I ring the first note of a piece. The effect to the audience is subtle, since the motion is towards them, but clear to the accompanist, viewing from the side and watching for this. Another way to signal entrances clearly, like the beginning of a phrase, is to exaggerate the preparation. Cock the casting back slightly more than needed to propel the clapper. This is visible to your accompanist and also gives her more time to react, since it increases the clapper travel distance.

When playing bell trees, your mallet stroke is quicker than a typical bell stroke, and it may be harder for your accompanist to anticipate the strike. You can compensate a little with nods, exaggerated body movements, and drawing back the mallet more than necessary. In the long run, it helps to develop precise rhythm and a shared tempo, so that, instead of the accompanist following you, the two of you are staying together.

Demonstrate the different damping effects (shoulder damping, table damping, hand damping, and finger damping), so your accompanist can see and hear the point where sound completely ceases. Especially when you’re shoulder damping, it can be difficult for your accompanist to gauge exactly when the bells will damp. At the end of the piece, I bring the bells two inches from my body, pause briefly, then make a definite motion so we can cut off together. This is also an excellent way to signal cutoffs in a duet or quartet.

Explain the impact of choreography on practice and performance. For example, accomplished musicians can start at any beat of any measure. Handbell soloists have to know exactly what the table looks like at our starting point, and have the correct bells in hand. Develop practice points that you and your accompanist accept as logical breaking points in the piece, learn to set the table quickly at each of those points, and consider assigning them rehearsal marks. Then you can always start from one of those points. Sightreading is also more difficult for handbell soloists. Mistakes made while reading the score (instead of watching what you’re doing) can damage bells.

Let your accompanist know whether you want to stop when you run into problems. It’s best to develop a habit of recovering from errors in rehearsal, so you can recover in performance. That’s easier said than done, especially if your choreography is complex. Point out passages where your accompanist may need to wait for you if you run into difficulty, perhaps repeating certain measures while you reset the table. It helps to reduce panic (and further mistakes) if you have an agreed-upon plan, and can take the time you need to set everything right before moving on. If you have a tricky setup, ask your accompanist to watch that you’ve moved certain bells and are clearly ready to continue. Look for places you can legitimately stretch the tempo to accommodate these problems. However, such adjustments need to make musical sense. You can’t just slow down on every difficult measure.

Your accompanist is the most logical person to cover the transition time while you reset the table between pieces. For short resets, nothing is needed. However, if you need to rearrange the table significantly, you may want your accompanist to play piano solos or introduce the next piece to the audience.

Tell your accompanist if you wear hearing protection, and ask to be told if your speaking volume needs adjustment. With my earplugs in, my own voice sounds loud to me, so I have to remember to speak up. I’ve heard of other soloists wearing hearing protection who yell at their accompanists. They may just be rude, but I suspect they didn’t realize how loud they were. I also tend to hear only my own voice if I’m talking, so my accompanist needs to get my attention before speaking to me. I’m a bit like a deaf person with my earplugs in, and my accompanist needs to know that.

If your accompanist isn’t part of the handbell community, you may need to interpret handbell culture for her. You may not always know how handbell people typically do things. When I started performing solos at handbell events, I always offered to pay the accompanist, usually another ringer attending the event. Eventually someone told me that money doesn’t usually change hands among ringers at events, so I bring a gift instead. I once took my accompanist to an out-of-town event, and paid her travel costs and fee to accompany me. I was surprised how many requests came for her to do other things: accompanying several other people, ringing, conducting. I couldn’t justify increasing her workload without compensation, so I declined the other assignments.

When you run your own concerts, you can organize the schedule to allow for whatever warmup you need, and control access to the performance space. At a handbell event, only 15 minutes may be allocated to warm up for your piece, at a break or at lunch, and other activity in the room is likely. During handbell concerts, there’s much more illegal recording and flash photography than at classical concerts for other instruments. This can detract from the performance by blinding the players and throwing off their rhythm, not to mention the potential for unauthorized uploads to YouTube, so be sure to warn your accompanist. If you plan to engage in shenanigans during your pieces, find an accompanist comfortable with that. It doesn’t translate well beyond a handbell audience; musicians generally express whatever emotions they perceive in the music through the music itself.

Your accompanist may not realize how much time and effort it takes for you to transport and set up equipment. I always have two call times: one for myself, and one for the accompanist. Usually we agree on what time she will arrive, and we understand she’ll need a few minutes to adjust the piano position. I try to facilitate this by having the piano in approximately the right place before I set up, because my tables will be in the way afterward. I also try to finish my setup before she arrives so I can help her adjust the piano angle and we can warm up promptly. I leave some room under the bell tables for her to store her purse, coat, and music bag.

After the concert, I consider tear-down my responsibility. The way I look at it, if my accompanist arrives prepared to accompany me, then plays the concert, she’s done everything I asked of her, and I’m perfectly OK with having her say goodbye and walk out the door. It’s kind of a zen thing for me to wipe down the bells and pack up, mulling over the performance. You may want to agree on a different arrangement, especially if you’re traveling or sharing rides. At one performance, a festival setting at a symphony hall, I was allowed only 15 minutes for my tear-down. I arranged in advance for both my accompanist and my husband to help me clear the stage in time for the next performer.

One of the things I love about my accompanist is that we seldom spend time talking about what we’re going to wear. She has a professional performance wardrobe and needs no fashion advice from me. When first performing with an accompanist, I mention my need to dress up so my formal table covers won’t be ashamed to be seen with me, just so she won’t be surprised and perhaps feel underdressed.